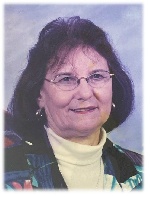 Gladys Mae Zahratka, 89, of Montgomery passed away on Thursday, January 6, 2022, at Traditions of Montgomery. Visitation will be held on Friday, January 21 from 10 a.m. to 12 p.m. with Memorial Mass of Christian Burial to follow at 12 p.m. all held at Most Holy Redeemer Catholic Church in Montgomery with Father Tom Niehaus officiating.
Interment will be in Calvary Cemetery at a later date. In lieu of flowers memorials are preferred and the family will send them to the Parkinson’s Foundation.

Gladys was born on July 14, 1932, in Veseli to Thomas and Emma (Cecka) Kennedy. She attended Holy Redeemer Catholic School “St. Raphael” and then graduated from Montgomery High School. Gladys was united in marriage to A.J. “Buck” Zahratka on February 26, 1949.
She worked at Munsingwear until 1980, Green Giant until 1994 and also hosted bus tours. She enjoyed traveling, going to casinos, reading and being with her grandchildren. Gladys was also a member of the V.F.W. Post 5340 Auxiliary for 70 years, and a member of Holy Redeemer Church CCW.

Gladys is preceded in death by her parents; brother, Richard; and sister, Sally.

Arrangements are with the Schoenbauer Funeral Home in Montgomery. 507-357-6116. Online condolences may be left at www.schoenbauerfuneralhome.com