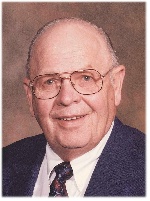 Harland was born on July 2, 1935 to Gus and Selma (Gedrose) Veen in Wells County, North Dakota. He was the youngest of 10 children. He attended school in a one room school house through eighth grade. Harland was united in marriage to Lorraine Vesperman in 1956. He worked as a truck driver for SuperValu in Hopkins and later became part of the dispatch team. In 1977, he bought the SuperValu store in Le Center and later he purchased stores in Le Sueur and Waterville and retired in 2006.

He was a proud member of the Minneapolis Shriners Club for over 40 years. After retiring, he enjoyed spending time with his friends at Mystic Lake Casino and visiting with family and friends. Harland was an amazing husband, father, grandfather, and a good friend of many.