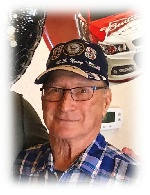 Elmer was born on March 9, 1937 in Montgomery on the family farm to Harry and Ludmilla (Brezina) Kukacka. He was a 1955 Montgomery High School graduate. After high school he entered the United States Navy for 6 years.

Elmer was united in marriage to Ruth Deno on September 12, 1959 in Belle Plaine. They lived in Eagan until 1974 when Elmer moved his family to the farm outside of Montgomery. Elmer farmed and worked at Ford Motor Company for 30+ years until his retirement in 1989. In 1990 he and Ruth purchased Montgomery Sweet Shop. He loved gardening and tending to his apple trees, loved playing cards with his family and going to casinos. Elmer and Ruth spent their winters in Texas for many years where he loved going to music jams and flea markets.

Arrangements are with the Schoenbauer Funeral Home in Montgomery 507-357-6116. On-line condolences may be left on our website www.schoenbauerfuneralhome.com.